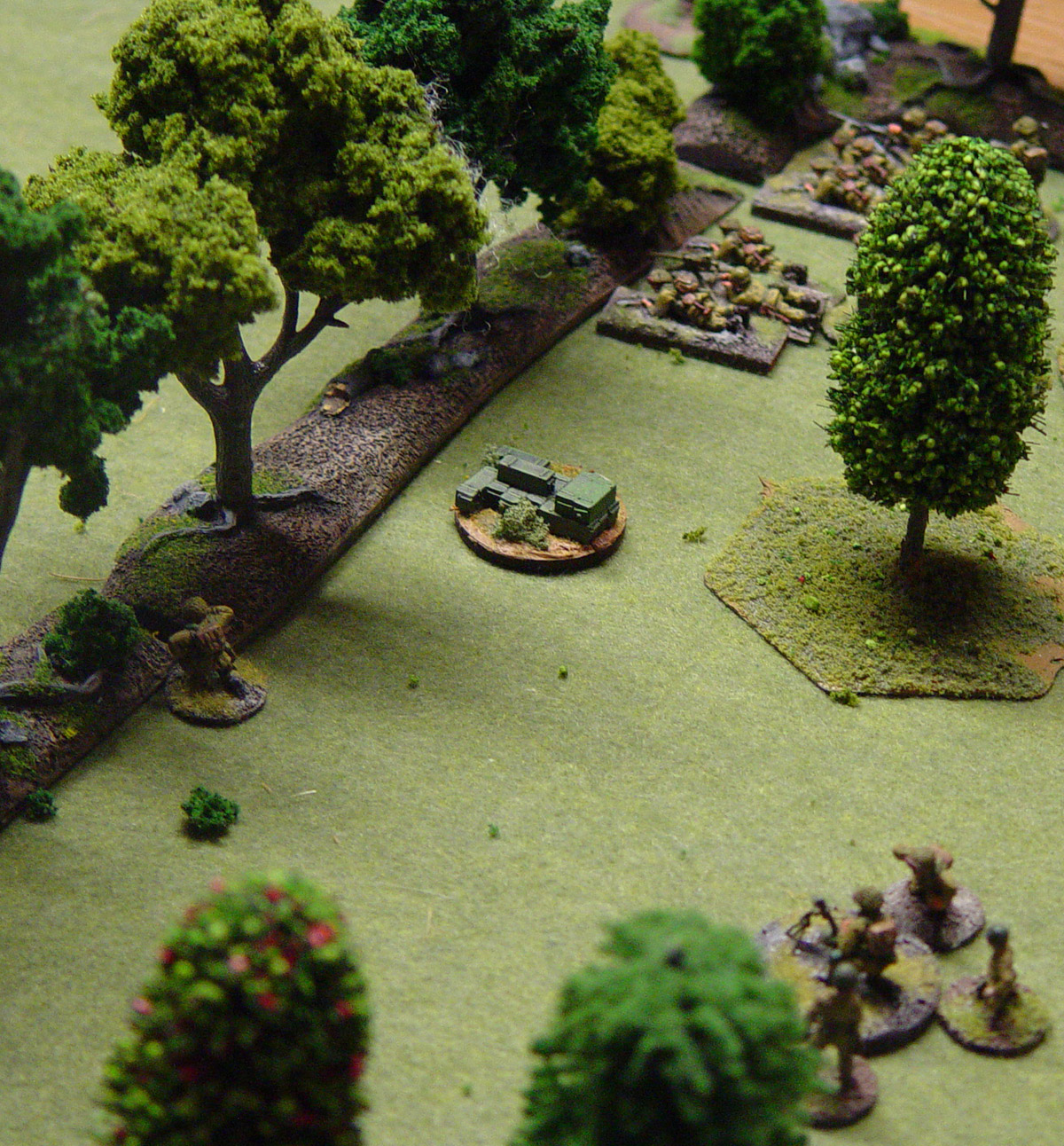 We have tried several CoC games, one-on-one and a few with several players per side - all learning games. This was our first "Club" game and went well with a few minor rules problems. We chose a scenario map out of the " 29Let's Go" campaign book from TooFat Lardies but modified it slightly and used standard troop selection from the basic rules (Both the "Delaying Action" scenario). The Americans chose an Armored Infantry Platoon with a Sherman tank with a Jr. Leader in support. The Germans chose A Heer Platoon supported by a tripod mtd MG42 and a Sr. Leader. 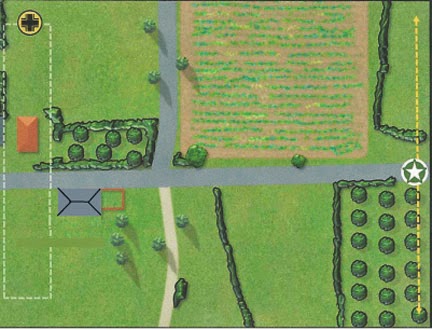 The scenario calls for the Americans to start their patrol markers spread along their set-on line as shown, while the Germans had to start at one spot within their set on area. The patrol moves went quickly with the Germans opting to hold back and have the Americans come to them. The next map shows the final postions of the Jump Off Points JOPS.
The Americans could not place any more than 3 JOPS, The Germans had the same requirement, one of which had to be on the objective (its in the house on the left).

The US had first move and placed their Hvy Wps Squad supported by the Mortar in the edge of the Orchard at the bottom right.
The German move was to deploy a Squad befing a small hedge on their right and immediately took the US MG position under fire. The US did not go on overwatch so had no response. The Next German placement was anothe Sqd in the hedges and orchard in the center of their position.
The US deployed one infantry squad with a bazooka team in the fields on their right before the German position. Though moving tactically, this unit took several casualties and shock as well as a wound to their Jr Leader. Firefights continued along the line of contact and the US brought on their B Squad with a Bazooka team. from the central JOP.  Ther German counter was to bring on their 3 Infantry Sqd. which includes and MG42 (bipod= 8 D6) and their one support a Atripod Mtd MG 42(Tripod = 10 D6). a total fire power of  28 dice when you include the leaders with SMGs. They were in the center house with LOS directly to the two American suads in the field.

In desperation, the two US Sqds charged the German central position in the Orchard only to be wiped out in Hand-to-Hand combat. The loss of 4 teams, 2 Squads(sections) and 2 Jr leaders caused numerous rolls on the Morale chart, the US dropping to a 1 and pulling what forces they had left off the field. As the remnants ot the force trudged to the rear, their captain ws heard to mutter "I should have used my tank, but they might have had a panzerfaust".
Posted by Dick Bryant at 4:34 PM 1 comment: Links to this post